The Burial of an Aristocrat 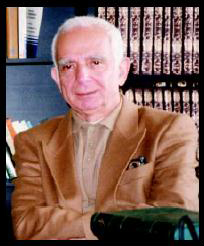 Houshang Vaziri, the Iranian journalist and editor of Kayhan London died in Paris on 4th September 2003 at the age of 72. He was buried on 13th September in Montparnasse Cemetery. Arriving early for the funeral, I walked round the celebrated graveyard I knew so well. Many times before I had wandered amongst the tombstones of Sainte-Beuve, Jean-Paul Sartre, Eugene Ionesco, Maupassant, Larousse, not to mention Shapour Bakhtiar and a growing number of other fellow Iranians. These ancient grounds embrace many moral and intellectual warriors. They are the resting place of numerous heroes of a knightly order who have battled against darkness, ignorance and inhumanity. On this particular Saturday afternoon, hundreds of Iranians gathered together to bid farewell to one of their valiant men of letters. The erratic Parisian weather was exceptionally bright and the whole atmosphere was charged with felicity. There was no place for gloom in honoring a life brimmed with vitality.

After the burial, everyone was invited to attend a memorial ceremony in the Hotel Lutetia where the family and friends of Houshang Vaziri assembled to pay their respects. Listening to the tributes of Shaheen Fatemi, Dariush Homayoun, Fereydoun Khavand, and Houshang Vaziriâ€™s daughter Katayoun, it was clear that Vaziri had left a strong impression on whomever had crossed his path. He had enriched and illumined a great many people who had come into contact with him and partook of his wisdom and humanity.

In his tribute, Dariush Homayoun pointed out how on this occasion, friends and relatives of Houshang Vaziri were gathered together not only to mourn a terrible loss, but more so to celebrate a wonderful life. He paid homage to a friend and an ex-colleague whose judgment and conduct was never marred by extravagance. His actions were consistently governed by "balance and moderation", Houshang Vaziri was an ambitious man said Dariush Homayoun. "His ambition was to reach the highest possible point in informing and enlightening his public". Calling Houshang Vaziri a true 'intellectual', Dariush Homayoun went on to say that there have been so many different interpretations of that term and he himself subscribed to Vaclav Havel's definition which he believed best described the character of this outstanding journalist:

"An intellectual is a person who - thanks to the range of his interests and his education - perceives things in a broader context than is usual. It is someone who attempts to get below the surface, to grasp the deeper meanings, relations, causes and effects, to recognize individual items as part of larger entities. And more than that, an intellectual, conscious of the broader and deeper connections, also derives from this awareness a broader or deeper sense of responsibility for the world.

"  As the spokesperson for Vaziri's family, his daughter went to the podium to say a few words. Although obviously overwhelmed with grief, she never faltered in her words and carried herself with a superb comeliness and composure. She related her memories of a father who always, even from a young age treated her as an equal. His loss has made me very lonely she said, and recalled how as a child she used to accompany him on his mountain hikes. My father, she continued, loved the mountains, he took me with him on his walks from the time I was eight years old. While we climbed he never humored me with childish talk. With his wonderful memory he recited poetry and spoke of music and literature. When we reached the teashops at he top we sat down to a meal of eggs and pomegranate juice which he loved best.

At the end, as everyone was leaving the hall of the sumptuous hotel, I saw Dr. Shaheen Fatemi, the man who oversaw the organization of the whole ceremony, walking towards the exit. One beautiful flower had fallen from a huge bouquet standing on the table in the entrance. He picked it up and held it in his hand looking contemplative. What was he thinking I wondered? Leaving the hotel we all left with a strong scent of life in our minds. Houshang Vaziri is an unfading flower from a magnificent bouquet that comprises the contemporary intellectual life of our nation. He will have his due place in our national consciousness and will be cherished in our collective memory.

Mr Vaziri recognized the root-cause of our political and social problems in the dearth of a true rational outlook. He harbored no illusions about reforming the regime of the Islamic Republic which is founded on ignorance, violence and transgression. He believed that the Gordian knot of our political system can be untied only by the dint of reason and by an informed and judicious approach. By helping to open our eyes to the reality of what we are faced with in our country he did a lot to educate the public mind and make us cognizant of a true and noble alternative.

D.H Lawrence wrote: "If a man, whether by thought or action, makes life, he is an aristocrat. An aristocrat is a person who puts his fellow human beings into a new relation with their universe". In the world of our contemporary journalism Houshang Vaziri has triumphantly accomplished this task.