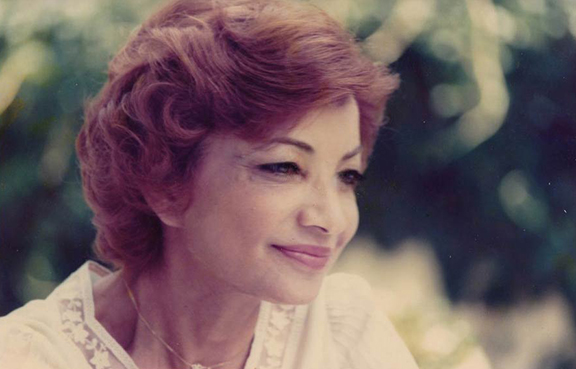 Princess Ashraf Pahlavi has recorded her eventful and tumultuous life in two books: Faces in a Mirror and Unconquered. In these autobiographies, she writes about those life experiences that made her a bold and influential leader in a society where women had just begun to fight for freedom and elementary rights. She also recounts the historical events that she had witnessed or been a part of, from the Tehran Conference to the Islamic revolution. She reveals the details of her meeting, in the summer of 1946, with Josef Stalin, the powerful leader of the Soviet Union and describes her many conversations with him. In Faces in a Mirror, Princess Ashraf describes her memories of meeting with the powerful Secretary General of the Communist party:

Stalin must have noted my agitated state since he started the conversation with platitudes and friendly personal remarks to calm me down. His chief of protocol had already told me that due to Stalin’s crowded schedule, our meeting would only last for 10 minutes. However, it seemed that the General Secretary was not in a hurry.  Furthermore, when the chief of protocol entered the room and cautiously murmured a few words in his ears, Stalin dismissed him by waving his hand and pointing at the door. , , , I reminded Stalin that following the Russian revolution Lenin annulled every concession that the Tsarist government had forcibly wrested from Iran thereby gaining the respect and admiration of the Iranian people.  Then, in a highly impassioned and excited tone I implored him to cease his support of the secessionist government in Iran’s Azerbaijan province. I tried to persuade him that the creation of a Russian puppet regime in Iran would seriously impair Soviet-Iranian relations for years to come. I also reminded him that for Soviet Union, Iranian trust and friendship were worth a great deal more for Russia than the creation of a secessionist province in Iran. Stalin listened carefully to what I was saying without ever interrupting me. Whenever the chief of protocol tried to say something about time, Stalin would send him out. When I stopped talking, Stalin began by saying that Iran does not really need “other friends’ when it has the friendship of the Soviet Union. Meanwhile, several times he alluded to Iran’s request from the Security Council to take up its complaint against Soviet Union. He further added that our differences could be solved by negotiations and mutual understanding and without the intrusion or interference of any other government or organization.

Our conversation was supposed to end only ten minutes, but it lasted for two and a half hours when Stalin shook my hand and accompanied me to the door. Just before my departure he laid his hand on my shoulder, looked into my eyes and said: “Please convey my heartfelt greetings to His Majesty, your brother, and tell him that if he were served by only ten other advisors like you, he would not have any worries.” Then, while he was leaning toward the interpreter, pointed at me and said “She is a true patriot.”

The next day, when I was supposed to visit a hospital in Moscow, I was informed that hospital visit has been cancelled since Generalissimo has invited me to join him to watch a sportive event in Moscow’s biggest stadium.  At the stadium, I was led to Stalin’s pavilion where he asked me to sit on the chair next to his. High ranking Soviet dignitaries, including Molotov—who was instantly recognizable by his round eye glasses and Mongolian face—were also present at the stadium. I could sense that Staling had   never met a princess and entertains no affinity toward monarchical regimes. But, that day he paid much attention to me. He would ask if I am comfortable, offered me tea and cookies and gave me some information about the sporting shows we were watching. Before my departure from Moscow, Stalin gave me an exquisite mink coat which caused quite a chatter in Iranian newspapers. I still enjoy wearing the coat which was the sole memento of my first diplomatic mission abroad.”

In faces in a Mirror, she also writes about her meetings with Zulfiqar Ali Bhutto  Pakistan’s Prime Minister and Zhou Enlai, China’s Prime Minister. Her friendship with Bhutto began in 19 64 and lasted till Bhutto’s execution. Of their friendship and Bhutto’s gift to her, she writes:

Bhutto’s lasting gift to me was the chance to meet with Zhou Enlai. For years I had believed that one cannot ignore a country as populous as China, particularly when considering its membership in the United Nations.  Bhutto knew of my eagerness to meet Zhou Enlai. So he made arrangements for such a meeting in Pakistan’s embassy in Indonesia. This meeting led to my first trip to China. In my initial encounter with Zhou Enlai, I was quite impressed by his calm voice, and delicate, if not feminine, demeanor. In our conversations he spoke of his country’s traditions and customs. Despite his calm appearance, Zhou Enlai had succeeded to retain his leadership position by thwarting the plots of his political rivals. He was also given the nickname of “pou-ta-ou-vang” meaning a doll who bounces back every time it is tossed around. . . . . Despite their reputation for being secretive and mysterious, I found Zhou Enlai and other Chinese leaders to be frank and plain spoken, unlike the Russians who use too many words to define a single point. In a word, the Chinese tell you exactly what they want and expect others to do the same. After returning to Iran, I told my brother that: “One cannot ignore a country of 800 million people by pretending that Taiwan has replaced China.” He agreed with me, yet Iran’s diplomatic relations with China were not resumed until 1965.

H.I.H. Princess Ashraf Pahlavi is the twin-sister of the late Shah of Iran. Her son was assassinated by agents of Tehran dictatorship. The clerical group in Iran is now entering its eighteenth year of ferocious rule. It has imprisoned and executed countless Iranians, abolished all elementary rights of the people, sapped the cultural foundation of Iran's society, wrecked it's economy and with fostering and exporting terrorism it has contributed to its own global isolation.

In Time for Truth Princess Ashraf brings out her testimony. She casts fresh light on the problems encountered by the Iranian monarchy baffled by an unyielding clergy, defied by the communists and most of all deceived by erratic allies in the West. It is a thorough account of how Washington, London and Paris deserted the legitimate government of Iran and now live to regret.

Here, in what is bound to be one of the most controversial and talked about books of the decade, Ashraf Pahlavi, twin sister of the Shah of Iran, tells the extraordinary story of her life and of her country. For the first time she records her views -- based on personal experiences and inside information as only she could know them -- of the events which surrounded the removal of the Shah, the take-over by the Khomeini regime, and the international furor which resulted from her brother's treatment at New York Hospital.

"No matter how I would reach out in the years to come - sometimes even desperately - to find an identity and purpose of my own, I would remain inextricably tied to my twin brother. I would marry more than once. I would have children of my own. I would work for my country in ways unheard of  for a woman of my generation. I would even go into exile (three times) alone. But always the center of my existence was, and is, Mohammad Reza Pahlavi."

In FACES IN A MIRROR, she recalls her fiercely determined rise to independence and political activity in a country that traditionally has granted women few rights and little freedom- some even came to call her "the real power behind the throne." Now she recounts the historic events she has witnessed and been part of for four decades since the time of the Teheran Conference in 1943:

* She discloses new details of her visit to Joseph Stalin at the height of the Cold War, when Iran was facing grave dangers from the Soviet Union.

* She talks for the first time about her intense personal struggle with Iran's controversial Prime Minister Mohammad Mossadegh and reveals her secret role in "Operation Ajax" - the CIA operation that led to Mossadegh's fall and kept Iran from the hands of the Communists.

* She offers a comprehensive account of the events that led to the overthrow of the Shah and makes clear how central was America's role in bringing about the downfall of the monarchy.

* She tells what happened in the last year of the Pahiavi reign, how it happened, and who the men were behind the upheaval.

Ashraf Pahlavi speaks directly to the widely publicized accusations that have been made against the Pahlavis and against herself  -  charges ranging from police brutality and misappropriation of public funds to espionage, smuggling, and even drug traffic. "It is," she writes, "in part such allegations that have led me to write this book  -  not as a way of defending myself, but as a way of considering these charges candidly and truthfully and as a way of setting out the political events in my country, as well as the events of my personal life."

This is a courageous, frankly personal document by one of the most extraordinary women of our time  -  a woman who has participated in some of the most critical moments in our postwar history. She has shared the burdens of her brother as he was forced into exile and had to search the world for a new home, watched the raging controversy outside as her brother lay ill in New York Hospital, and, in December 1979, received the news that her son Shahriar had been shot and killed in a Paris street.

Whatever your views about Iran, the Pahlavis, or American policy in the Middle East, you cannot fail to be moved and enlightened by this gripping account of a woman caught in the vortex of history.

Tweet
More in this category: « Social Activities Foundation For Human Studies »
back to top