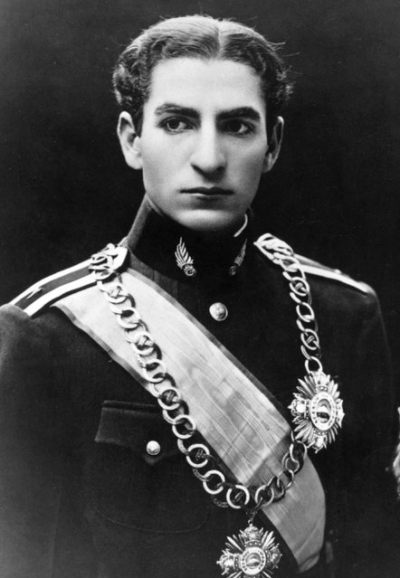 His Imperial Majesty Mohammad Reza Pahlavi was born in Tehran on October 26, 1919, the first child of Reza Khan’s marriage to Nimtaj, daughter of his commanding officer in the elite Persian Cossack Brigade. His twin sister, Ashraf, was born four hours later.

Mohammad Reza was formally proclaimed Crown Prince of Persia in 1926 following his father’s ascension to the Peacock Throne as Reza Shah Pahlavi. While Reza Shah pursued a program to modernize and develop Iran, changing Persia’s name to Iran, and placing the government in the hands of western-trained technocrats, Crown Prince Mohammad Reza was educated at the Le Rosey boarding school in Switzerland and then enrolled as a cadet in the Military College of Tehran. In 1939 he married Princess Fawzia of Egypt (1921-2013) who gave birth to Princess Shahnaz (b. 1940). In September the combined armies of Great Britain and Russia invaded and occupied Iran, ostensibly to prevent the country’s oil assets, railways and roads from falling into German hands. Reza Shah abdicated in favor his son who succeeded to the throne as Mohammad Reza Shah Pahlavi on September 16, 1941.

The defeat of Nazi Germany was followed in short order by the Cold War, which placed Iran on the front lines of the East-West conflict. Following the 1946 Azerbaijan crisis, when the Soviet Union supported a breakaway movement in Iran’s north, the Shah pursued closer strategic ties with the anti-communist West. The young emperor survived an assassination attempt in 1949 carried out by an underground Islamist group. In 1951 Iran’s parliament, the Majlis, recommended that the Shah offer the premiership to Mohammad Mossadeq, leader of the National Front and the leading advocate of oil nationalization. The Shah approved Mossadeq’s appointment but expressed concerned at his prime minister’s confrontational tactics towards Great Britain, which refused to end its oil monopoly. Events came to a head in August 1953 when a powerful domestic coalition consisting of the Iranian army, the Tehran bazaar and senior Shia clerics ousted Mossadeq to prevent what they feared was an abortive communist takeover. At the height of the crisis the Shah was temporarily exiled before returning to Tehran in triumph. The anti-communist uprising was supported by the US and British governments.

In the early 1960s the Shah unveiled his ‘White Revolution’, an ambitious package of social and economic reforms to develop and modernize Iran. The ‘White Revolution’ included land reform, civil rights for women, nationalization of forests and waterways, and the formation of literacy and medical corps to help Iran’s rural poor. Conservative opposition to the ‘White Revolution’ peaked in June 1963 when Ayatollah Khomeini, a fundamentalist clergyman, led an uprising that was defeated by the army. The Shah established executive rule and used Iran’s burgeoning oil revenues to finance the transformation of Iranian industry and agriculture. By the time of his belated coronation in October 1967 Iran enjoyed one of the highest rates of economic growth in the world and a reputation as a bastion of peace and stability in the Persian Gulf. The Shah emerged as an international statesman whose Imperial Armed Forces provided a protective shield over regional oil assets and shipping routes.

In the early 1970s Iran under the Shah’s rule emerged as the dominant power in southwest Asia. With a booming economy, the strongest military in the region, and strong support from its western partners, Iran provided the region with stability and security. The Shah stepped up the pace of modernization and Iran became a regional hub for commerce, science and the arts. He began his country’s nuclear program and embarked on far-reaching efforts to provide national health insurance, rights for workers and a comprehensive social welfare system. In 1971 the Shah invited world leaders to Iran to mark the 2,500th anniversary of the Persian monarchy. Three years later Iran’s oil revenues quadrupled as a result of the so-called ‘Oil Shock’. Ultimately, the influx of oil revenues overheated the economy and contributed to popular unrest. High oil prices also raised tensions with Iran’s western allies and especially the United States. In 1976 the Shah embarked on a program of liberalization and announced his intention to hold free elections. His political reforms coincided, however, with the emergence of two threats, one from the religious right led by Khomeini, the other from the far-left supported by terrorist groups financed, trained and armed by Libya, the PLO and the East Bloc. These groups took advantage of liberalization to form an alliance that stoked social unrest and caused panic and terror.

In January 1979, rather than support a military crackdown that would have caused bloodshed, Mohammad Reza Pahlavi left Iran for exile. He died in Egypt from lymphoma on July 27, 1980. He is buried in Cairo’s Al-Rifa’i Mosque.

Head of House of Pahlavi